Leh, headquarter of Leh District is the largest town of the region. It is located to the north of the Indus River at an elevation of 3600m above the sea level. The town is dominated by the Namgyal Tsemo (victory peak) built by King Tashi Namgyal in 16th century, as a royal residence and the nine-storey Namgyal Palace built by King Sengge Namgyal on his victory in reunification of the Upper and Lower Ladakh in 17 century. Leh became the capital of Stod (upper Ladakh) during the reign of King Graspa Bum- Lde, who ruled Ladakh from 1400 to 1430 AD. In the later period, Leh became an important center for trade in Central Asia, along the Indus Valley between Tibet to the east, Kashmir to the west and ultimately between India and China. 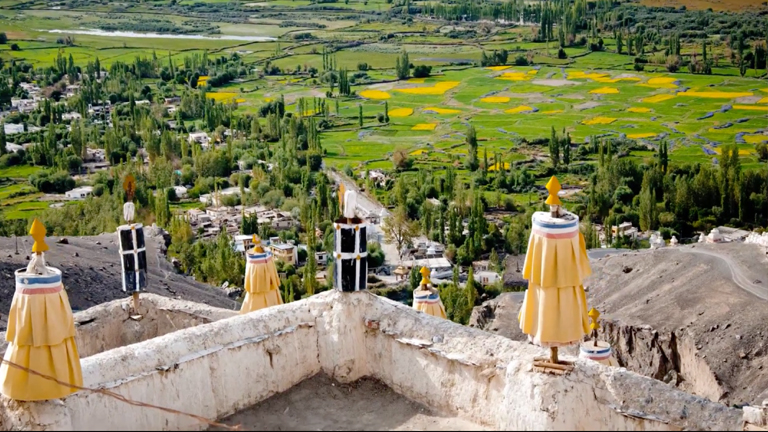 Right below Leh Palace is the old mosque, a Sunni Muslim mosque. It was constructed under the threat of military action by the Mughal Emperor Aurangzeb which prompted King Deldan Namgyal to build the mosque in 1661. The mosque reflects a mixture of Islamic and Tibetan architecture and can accommodate more than 500 people. There is a religious coexistence of Buddhism and Islam, have been living in Harmony in Leh. Thus, Ladakh an ag-old tradition of cohesiveness Besides these two communities there are people living in the region who belongs to different religions like Christianity, Hinduism, and Sikhism. And they too live in harmony and forms a vital part of the society.The Christian community in Leh were converted from Tibetan Buddhism by German Moravian missionaries who first established a church in 1885.
In order to provide a transparent development in the area the conception of the council was conceived and Ladakh Autonomous Hill Development Council (LAHDC) was constituted in 1995. The council has 30 councilors, out of which 4 are nominated and rest are elected. The Chief Executive Councilor heads this council. He is also the Chairman of the council. Unlike other districts of the State, LAHDC also governs the administration in Leh. The Deputy Commissioner, Leh also holds the power of Chief Executive Officer LAHDC.
In 1974 Ladakh was thronged open for foreign tourists. Since then Leh became the centre for tourism related activities in the region and today, Ladakh is among the most preferred tourist destination for foreign as well as domestic tourists. Leh has a cold, arid climate with long, harsh winter season that is, from October to early March. The winter temperature in Leh dips down at maximum to -29 degree Celsius and during summers the mercury rises to a high of 33 degree Celsius.

Overland Approach – The overland approach to Ladakh from Kashmir Valley via Kargil is approx. 434 Km, which remains open for traffic from early June to November. The most dramatic part of this road journey is the ascent up the 11,500 feet 3,505 m high Zoji-La, the pass in the Great Himalayan Wall that serves as the gateway to Ladakh. The J & K State Road Transport Corporation (J&K SRTC) operates regular Deluxe and Ordinary bus services between Srinagar and Leh on this route with an overnight halt at Kargil. Taxis (cars and jeeps) are also available at Srinagar for the journey. Groups can charter Deluxe and A-class buses for Leh, Kargil or Padum (Zangskar) from the J & K SRTC at Srinagar.
Manali to Leh – Since 1989, the 473 km. Manali-Leh road has been serving as the second overland approach to Ladakh. Open for traffic from around mid-June to early October. This high road traverses the upland desert plateau of Rupsho, altitude ranges from 3,660m to 4,570m. A number of high passes fall enroute among which the highest one known as Taklang-La is world’s second highest motorable pass at an altitude of 17,469 feet/5,235m. Himachal Pradesh Tourism, HRTC and J & K SRTC operate daily Deluxe and Ordinary bus services between Manali and Leh. The bus journey between Leh and Manali takes about 19 hours or two days with an overnight halt in camps at Serchu or Pang. Maruti Gypsy and jeep taxis are also available, both at Manali and Leh at quite reasonable rates.

Leh Palace was built during the 17th century by the ruler King Sengge Namgyal. Its construction is on the same lines as the construction of the Potala Palace in Lhasa, Tibet. This palace had to be deserted by the royal family in the middle of the 19th century, because of the taking over of Ladakh by Dogra forces. After this the royal family is living in-exile in the popular Stok Palace. The Archaeological Survey of India (ASI) is restoring some of the ruined portions of this nine-storey palace. While the store rooms were on the lower floors, the royalty resided on the upper floors. The roof of this palace offers an excellent view of the valley.

Built in the 16th century is Tsemo (Victory) Fort, is just15-minute climb-up opposite Chenrezi Lakhang with its ruins. This structure is actually visible from everywhere in Leh. This fort seems like a crown on the head of the Palace ridge. This small but ruined palace contains of a number of worship flags. Directly underneath it is Tsemo gompa that is Tsemo monastery that consists of two temple buildings built in the 15th century, an eight meter tall gold-faced statue of Maitreya Buddha.

The Hall of Fame

The Hall of Fame, located near the Leh Airfiled, is a museum constructed as well as maintained by the Indian Army in the memory of the soldiers who had lost their lives during the Indo-Pak wars. It is also termed as a memorial for the war heros. This building consists of two floors. While on the ground floor, there is information about the brave soldiers as and a souvenir shop but on the first floor, there are artifacts of various wars (mainly Kargil war) such as the weapons used during the war and some important documents, related to the same. There is another section dedicated to the Siachen glacier.

The Shanti Stupa is white-colored domed-shaped structure, located in Chandspa which looks extremely beautiful during night when it is illuminated. This peace pillar was built a ‘peace sect’ of Japanese Buddhist organization to celebrate the completion of 2500 years of Buddhism and for the promotion of world peace. It was inaugurated by His Holiness, the Dalai Lama in 1985. This pillar is known for its gilt panels depicting the life stories of Lord Buddha. It is just 5 kms away from the main city of Leh and is surrounded the traditionally built houses of the locals and snow-covered mountains. Take the steep slights to reach the Stupa that offers beautiful sunrise and sunset views.