About 20 kms south-east of Rangdum stands the Panzila axis, across which lies Zanskar, the most isolated of all the trans-Himalayan valleys, Zanskar is a remote, ancient kingdom in the northwest Indian Himalaya. About 10,000 Zanskari people live in isolated villages spread across Zanskar, which has a valley elevation of over 3500m. Winter temperatures of -30 Celsius are common, making it one of the highest and coldest inhabited places in the world. Zanskar a subdistrict or tahsil of Kargil district, which lies in the eastern half of the Indian state of Jammu and Kashmir. The administrative centre is Padum . 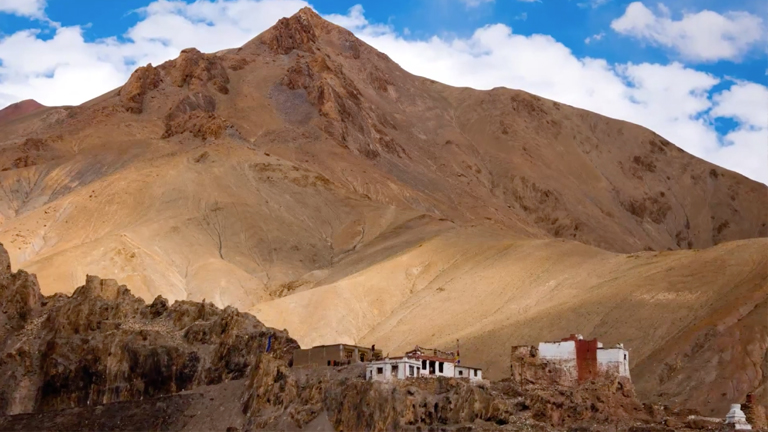 Zanskar is a tri-armed valley system situated between the Great Himalayan Range and the Zanskar mountains, the three arms radiating star-like towards the west, north and south from a wide central expanse. Here the Zanskar River comes into being by the confluence of its two Himalayan tributaries, the Stod/Doda and the Lingti-Tsarap rivers. It is mainly along the course of this valley system that the region’s approximately 14,000 strong, mainly Buddhist population, live. Spread over an estimated geographical area of 5000 sq kms of mountainous territory, Zanskar is surrounded by high-rise mountains and deep gorges.
It remains inaccessible for nearly 8 months a year due to heavy winter snowfall resulting in closure of all access passes, including the Penzi-la. This geographical isolation and the esoteric nature of Buddhism practised here have enabled its inhabitants to preserve their identity, so that to-day Zanskar is the least interfered with microcosms of Ladakh. Closer observation of the lifestyle evokes admiration for a people who have learnt to live in perfect harmony with the unique environment.

The route from Kargil to Padum is the only motorable road to reach Zanskar valley,which remains open from May to October. The kargil to Padum road was completed in 70’s.Even today this road is not paved and has been neglected by government.The construction new road through Chadar has already been started by government of India which can be shortest route to reach Leh. Approaching Padum through this route,one travels south,along the Suru river,which flows down from Penzila Pass through Suru valley and Zanskar
The Suru valley is one of the most beautiful regions of Ladakh that is inhabited by people of the Balti origin of Muslim communities,but in the past,the valley was populated by Buddhist.There are few rocks carving of Maitriya Buddha,at Kartse khar and Padmapani Avaloketeshvara at Byama Khamu.

Padum is around 464 kms.from leh and 234 kms.away from Kargil.Once the Capital of the Zanskar valley,today it is administrative headquater of the region and probably the most populous settlement of Zanskar.There is a small market along the main road with different colours.

It was founded by Maha Siddha Naropa who meditate here in the cave above the monastery.It remained meditation centre for many years.The footprints of Naropa can be seen in the caves even today.Around thousand years old monastery has 31 monks in residence.It is situated 25 kms.away from Padum in the west.

Kargil-Padum road side around six kms.from Padum and takes around one and half hours by walk.Guru Padmasambhava said to be visited sani and practiced meditated for several years.Naropa also visited Sani and practice meditation for many years.Sani Nasjal(monastic festival)take place according to Tibetan caleder.

The Karsha monastery is situated on a steep mountain overlooking the Padum valley.It is around 9 kms.from Padum across the river and it takes around 2 hours by walk to reach Karsha. The Gonpa was founded by a translator Fagspa Sherab from Zanskar and later by Dorjay Sherab and Sherab Zangpo of Stod.At present it is the largest Gelukspa monastery in Zanskar.Around 90 monks are in residence.

Stongdey les on a hill top around 10 kms.to the north of Padum on the way to Zangla.It takes around 3 hours by walk. Stongdey Marpaling is derived from its founders name Marpa.The monastery belongs to the Gelukspa order.At present around 60 monks are in residence.

The Phuktal monastery is picturesquely set on a mountain that looks like a bird nest.It is situated on the west of Padum.This Gonpa was founded by phaspa Sherab,later a monastic community was introduced.The Phuktal festival take place on 18th and 19th days of 12th month of Tibetan calendar.

The monastery is situated on a huge rock overlooking the Lingti river to the south of padum,on the Lamayuru Darcha trekking route.The Gonpa was founded by Dewa Gyasto in the 17th century A.D.Barda Gonpa is branch of Stakna monastery.Around 40 monks are in residence here.